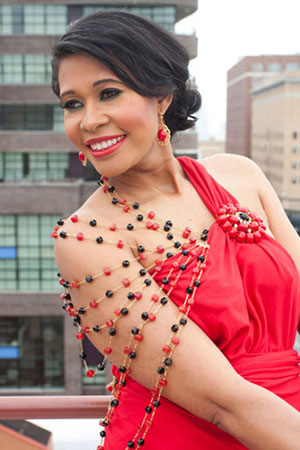 Alzerina was recently awarded the Congressional Certificate of Recognition by the U.S. Congress for her contribution to preserving Cape Verdean culture in the United States and for representing her adopted country’s efforts at a trade show in her homeland where she taught workshops for local impoverished teens. She has also been asked to represent a U.S. initiative to help further entrepreneurial skills and marketplace capability for women in emerging African countries.

Alzerina’s elegant designs, enhanced by the use of Swarovski elements and her youthful Alzi line of contemporary bracelets, earrings, and necklaces have been featured in numerous publications. She has gained a large following in the last few years and has worked with Miss Universe and Miss USA 2011. Her jewelry has been adorned by Sharon Stone, Olivia Wilde, Tracy Bergman on the set of “The Young and the Restless,” Carol Siva of Channel 12 News, actress Kathryn Winnick of “Vikings” and Rosanna Scotto of NY’s Channel 5 News. She has sold in quantity through her own and other websites. Last year she lit up Times Square when she was featured on the NBC electronic billboard overlooking NY’s most famous tourist area.

Alzerina remains dedicated to incorporating Swarovski elements in many of her creations.