This years’ Oscars had its fair share of entertainment but also had its significant moments in the fields of representation, inclusion, and politics. These show stealing moments captivated audiences and delivered a more serious overall tone to the show.

Jordan Peel became the first African-American to win Best Original Screen-Play for his film “Get Out”. 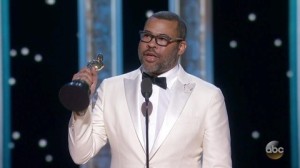 Peele expressed in his speech:

He continued on my thanking the public for their tremendous support for the film. Worldwide, the film grossed about 225 million dollars.

Frances McDormand’s acceptance speech for best Actress in a Leading Role become more of a call to action speech. 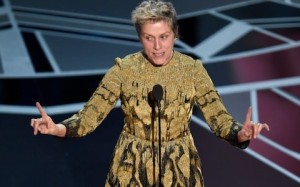 McDormand gave a powerful speech empowering all the women in filmmaking to take pride in their collective efforts. With determination she placed her freshly won award on the floor and addressed the audience.

“If I may be so honored to have all the female nominees in every category stand with me tonight,” she said encouraging the room with her arms spread. “The actors … the filmmakers, the producers, the directors, the writers, the cinematographer, the composers, the songwriters, the designers! Come on!”

She ended her speech with two words, “inclusion rider” which to most of us is somewhat confusing. An inclusion rider is a part of a contract that allows for the incorporation and guarantee of more representation and inclusion in not only the cast of the film but also the crew. This is something only few big names in Hollywood have the ability to fight for but if these larger actors and actresses urge for this clause, it could create new opportunities for individuals whom otherwise would not have them.

Lupita Nyong’o and Kumail Nanjiani presented the award for best Production Design but the speech they gave beforehand resonated with audiences. 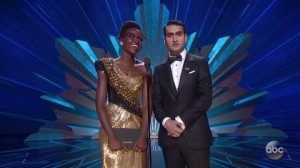 The two expressed their support for immigrant, reminding everyone that they themselves are immigrants. Nyong’o being born in Kenya and Nanjiana being born in Pakistan, directly addresses the “dreamers” of the country.

“To all the Dreamers out there, we stand with you.”

These statements were a direct reference to the declaration made by President Trump in September 2017 when he announced the disbanding of the DACA program. The program provided legal protection to younger undocumented immigrants living within the United States. These young people became labeled as Dreamers.

The acceptance speech given by the creators of “Coco” for best Animated Film emphasized the importance of representation from start to finish. 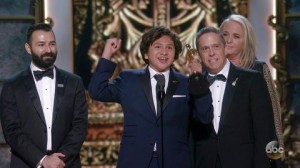 Adrian Molina, “Coco”’s co-director, and Darla K. Anderson, “Coco”’s producer made a point to thank their same sex partners in their short acceptance speeches. Director Lee Unkrich took center stage as he made sure to give credit to the rich Mexican culture that inspired the film.

“The biggest thank you of all [goes] to the people of Mexico,” said Unkrich. “Coco could not exist without your endlessly beautiful culture and traditions.”

“With Coco, we tried to take a step forward toward a world where all children can grow up seeing characters in movies that look and talk and live like they do. Marginalized people deserve to feel like they belong. Representation matters.”

During the performance of “Stand Up For Something” performed by Andra Day and Common, 10 activist were highlighted, literally, on stage as a spot light revealed them one at a time. 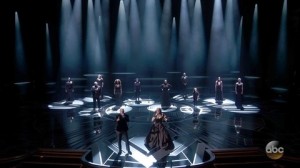 The performance drew attention to and celebrated the actual individuals that are doing the work to bring about change in our society. This political statement served as a reminder to audiences that in order for change to occur, action must be taken and we all are the ones responsible for doing so.