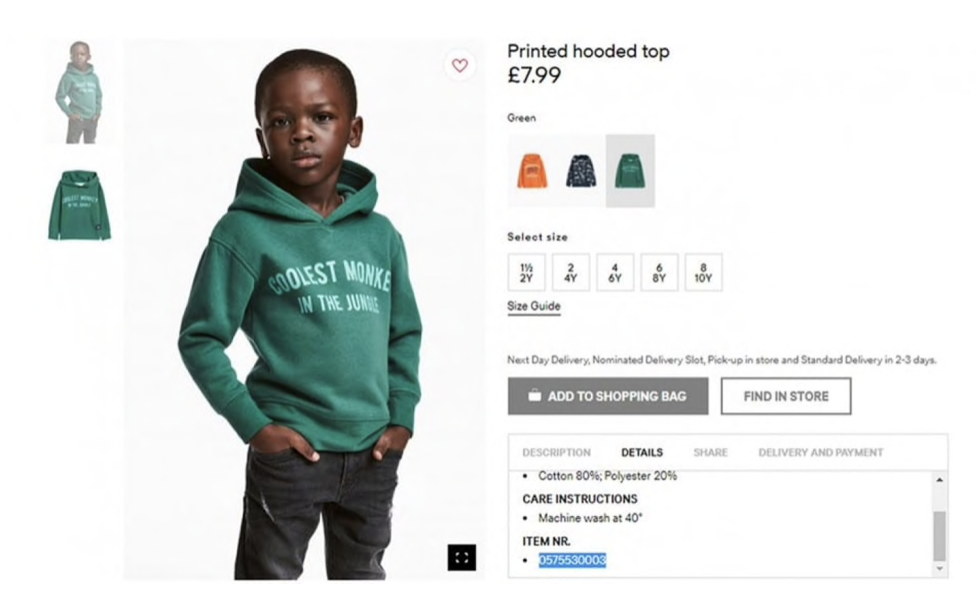 H&M online advertisement that features the black boy’s wearing a ‘coolest monkey in the jungle’ sweatshirt and “Survival expert” were modeled by white boy.

Twitter was abuzz with criticism from celebrities, journalists and social justice advocates. People took to Twitter about this story;

“So the black kid gets to wear the H&M sweater with “Coolest monkey in the jungle” and the white kid with “Survival expert”. This is beyond disgusting. It’s a projection of your neocolonial thinking. You won’t see me anywhere near your shops these days @hm” — big_deen (@Big_deen75)

“Woke up this morning shocked and embarrassed by this photo. I’m deeply offended and will not be working with @hm anymore…” — Abel Makkonen Tesfaye, better known as “the Weeknd”

“@hm u got us all wrong! And we ain’t going for it! Straight up! Enough about y’all and more of what I see when I look at this photo. I see a Young King!! The ruler of the world, an untouchable Force that can never be denied! We as African Americans will always have to break barriers, prove people wrong and work even harder to prove we belong but guess what, that’s what we love because the benefits at the end of the road are so beautiful!!” — LeBron James

Still, some argued on Twitter that despite how it appeared, H&M may not have had that intention.

“Am I the only one who doesn’t feel h&m meant it like that with the black little baby in the monkey shirt? Kids wear little cute stuff like that all the time…” — livibabyy (@LiViBADD88)

Recently H&M has apologized, removed the image, and given a statement to The Washington Post.

“We understand that many people are upset about the image. We, who work at H&M, can only agree. We are deeply sorry that the picture was taken, and we also regret the actual print. Therefore, we have not only removed the image from our channels, but also the garment from our product offering globally. It is obvious that our routines have not been followed properly. This is without any doubt. We will thoroughly investigate why this happened to prevent this type of mistake from happening again.”